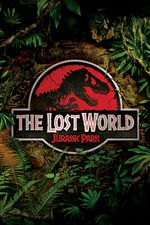 There's a moment near the end where a bus goes flying through a Blockbuster video store and a movie poster on the wall reads "William Shakespeare's King Lear". The face on the poster is Arnold Schwarzenegger. This shot happens so quickly that you'd almost miss it. Here it is. Was this thing created for the movie or did it exist already? Who knows, who cares.

As for the movie, it does hold a nostalgic trip deep inside me but it is clear Spielberg's heart wasn't in it the way it was with the first. The characters are stock schlock characters, even Goldblum is phoning in. There was that hot minute in the mid-90s where Goldblum was a legit movie star and I love that he got his moment in the spotlight. The movie finds the right balance of comedy in the final 20 minutes where it goes full-on Valley of the Gwangi. That T-Rex rampage was Spielberg giving us his Harryhausen tribute. The T-Rex robotics remain top-of-the-line. The flaring nostrils do it for me. I guess the only road to take this series is down Schlock Ave and it works on that level but that sense of "awe" is missing that made the first one so special.

Colin the dude liked these reviews

Colin the dude is using Letterboxd to share film reviews and lists with friends. Join here.