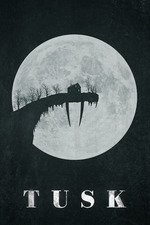 It is very, very rare to find a recent film that you know is destined to be a cult classic, but TUSK has everything you could want for a future 4 disc boxed edition complete with mammoth booklet and a ton of extras. Kevin Smith brings a handy bag of humour, an interesting story, a bunch of finely talented actors and some fantastic effects to provide the viewer with a highly entertaining film.

The synopsis made me think I was going to get something a little too silly but that soon left my mind as I embarked on an adventure that felt like CREEP in a blender with THE HUMAN CENTIPEDE. Michael Parks was such a wonderful actor and it makes me feel genuinely sad that he is no longer with us but I know I still have many a film of his I have not seen and I am eager to visit at my earliest opportunity. His look, demeanor, character and softly spoken voice bring this film alive and is the perfect partner for Justin Long's generally unlikeable Wallace Bryton. While I imagine I should be cheering for Bryton, I ended up firmly routing for Park's Howard Howe. Smith, that was some wonderful rounded character work there.

It moves along at a fine pace without succumbing to fatigue, it never stagnates, similarly to RED STATE it stays fresh and exciting, not to mention unpredictable throughout.

The film is surrounded by comedy, good comedy and it made me smile a dozen or more times but it's heart is dark and its reflection on change, not appreciating loved ones, fame and feelings is presented throughout.