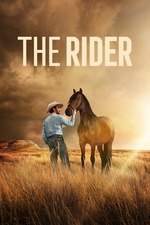 From the first 5 minutes of the film, you know you're in the hands of a master filmmaker

Poetic and melancholic, Chloe Zhao's The Rider is an emotionally powerful and beautiful film. Deeply personal and rivetting, Zhao's narrative follows that of Brady Blackburn, a recovering cowboy, and his dilemma between following his dreams and letting them go for the peace of his family.

The acting is pretty amazing. Brady Jandreau played his role perfectly, showing his emotions through furitive glances and subtle nods, depicting his internal struggle. The cinematography is gorgeous. It had a very personal touch to it through its medium shots and handheld. This was easily the best aspect of the film.

It's a slow burn film, soaking us into the atmosphere and situations the characters are in. It's a story that cut close to the bone, for me atleast, because here we see a man who, with all his breath, wants to go back to what he loves most but cannot because he is tied down by circumstances that, if abandoned, will lead to pain and suffering to those around him. There will come a time where we sacrifice our dreams for others rather than chasing them. And that very act of letting go is a feeling more powerful than acheiving them.

The major flaw of the film was the direction. It felt that the middle parts of the film were kinda aimless and directionless. It's a simple story and was very stretched out. Had it been more engaging, I would have had a more emotionally investing film

But, all in all, this is a film worth watching. Chloe Zhao is pretty awesome director and the film she has created deserves all the praise it gets