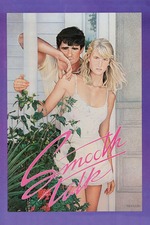 "If your broken heart should need repair, then I am the man to see. I whisper sweet things, you tell all your friends, they'll come running to me."

Innocence on trial in the forest of cubs and wolves. About as close to a time capsule of the 1980s as I've ever seen, Joyce Chopra's Smooth Talk paints a hazy yet acute likeness of teenage angst and sexual awakening. The rebellious sore thumb of an archetypal working class family, Laura Dern's Connie is whatever her mother isn't, refusing to help around the house or take any steps toward what she considers in her a sanded-off conformity. She gets along more reasonably with father, the provider (and that's it), a happy-go-lucky type incapable of enforcing much of anything. Her sister is mom's girl, and the prototype for blah. Connie finds vitality and tantalization in the unknown frontier of her sex, joining her friends in seeking out first-base interactions with meek high school companions without considering much of her limits and her vulnerability. I mean, how could she?

Then there's Arnold Friend (Treat Williams). Chopra masterfully teases Friend early on then allows him to crouch just out of frame like a lion watching a gazelle, until he gets his due in a slow, magnetic final third which also snaps into focus the raison d'être of the film. As a potential suitor and bow to tie off Connie's personal typhoon, Williams plays the role with a beguiling mix of charm, arrogance, and menace. His impish, rhyming mannerisms and casual aura of predetermination run Connie and the viewer through the ringer from curiosity to dread. The seduction effort bears that of a hollowed James Dean, idolized via poster in Connie's bedroom. Dern's command of Connie's deliberations, internal and external, is extraordinary for a young actor, and if her final decision leaves some viewers aloof, you could be forgiven. It makes Friend's morality unusually slippery, straddling the line between feckless opportunism and outright impropriety.

There is something primal and inevitable about where this goes, if also tragic. Like denuding the fiery bursts of sexual agency through a cold textbook. I found it completely fascinating. The juxtaposition between the first sixty minutes and the last thirty is a wallop. If the viewer can brush past the leap of an 18-ish Laura Dern playing a 15 year old, Smooth Talk is just about a perfect film.