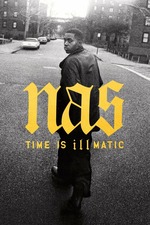 If the life of Nasir Jones was the most street-decked, funked out venue for rhyme spitting your two legs had ever graced, then this examination of his roots and landmark debut album only takes you up to entrance to get in, flush with the velvet ropes. It's a good taste, full of interesting backstory and rough portraits of brothers and life on the streets in the Queensbridge projects, but ultimately just whets the appetite for a broader, more meticulous treatment. Specifically, I would have adored a deep dive into the Source 5 mic controversy. At the very least, it made me once again want to slide on some headphones and slip into the gritty smoothness of the greatest hip hop album ever made.

Devil in a Blue Dress