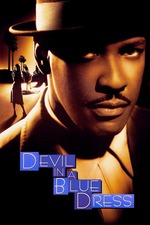 Devil in a Blue Dress

Didn’t connect with me as much as I’d hoped. I found the plotting semi-convoluted and the character work thin. That being said, Carl Franklin’s velvety period noir has a much subtler, richer subtext in its pot to stew over, and his canvas of the racially-charged hotbed of 40s Los Angeles aptly cashes the check. After numerous primers along the way, we finally fade to black not after tying off the final plot thread, or in a close up capitalizing on star power, but rather on a community. A black community. Shots of girls jumping rope, pony rides on a front lawn for 15 cents, neighbors schmoozing and gossiping, a strange local character obsessed with chopping down trees. Americana. Devil in a Blue Dress envisions the seeds of black autonomy and self-determination on the streets of middle-century America, and how simple facts like ownership of private property can threaten as much as it can be symbolic. Seeing Denzel’s Ez Rawlins, confident and broad-chested, walk off the street and into his home with a friend, an evening of booze and laughs ahead of them, is an image more comforting and somehow radical than I could have imagined going in.