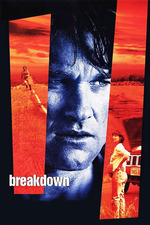 I am the Donut King.

One of those flicks I caught an inexplicably large amount of times growing up. It's funny how added years change your perspective on a film text. Breakdown's canvas used to feel gargantuan to me, an exploration of one couple's waking nightmare wrought on the vastness of desolate desert highways. While the scope of the events now feels significantly smaller and constrained with thirty-something eyes, especially with its brisk 90 minute runtime, I actually think the film is better for it. This is a Hollywood thriller all the way, but it pisses me off that can get written off in the pejorative. Jonathan Mostow's film relies on expertly calibrated extortion artists who are also comically evil, yet the film is so immediate in its conflict and dementedly entertaining I couldn't help be swallowed up by it. There's a lot to like here. Kurt Russell. Obviously. A clipped but effective free-bird in Kathleen Quinlan enjoying a scalding hot post-Apollo 13 run. J.T. Walsh - did anyone in the 90s have slimy sociopath more on lockdown than this guy? Truly excellent work. Possessing a taut script with an immediate hook and zero fat, Breakdown is positioned like a stake to the heart of the blind trust and free-love of the late 1960s, a reminder that wolves exist and stalk the underlying glue which patches together the social contract. Is a scenario like this remotely plausible? Not likely. Mostow's film acts as if it is, and by the time a malevolent big-rig is dangling off a tiny municipal bridge as our hero and villain thrillingly fight for all the marbles, my smile is too wide to care. On the other hand, one bad guy's fatalist warning of "Maybe next time you'll learn not to leave your hood up when you go inside a convenience store" - Rock solid advice.