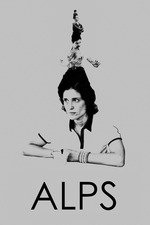 Who wouldn't want a stranger "substituting" in for their dead loved one? Interesting post-Dogtooth experiment from Yorgos Lanthimos, which finds him continuing to parse, sequester, and cattle prod the elemental building blocks which define human interaction, and here specifically, grief and mortality. The film feels like a full-frontal assault on false consolation, hyperbolized to absurdist lengths. Trademark stilted deliveries and ink-black humor abound, crystallized most elegantly in the following:

(To the grieving parents of their deceased daughter, a tennis player)
"Your daughter lost the most important match of her life. Her opponent was too tough."

The mysterious Palahniuk-esque group that comprises the Alps is decent enough fodder for the wire-thin narrative, giving us just enough clues about the inner power structure and hierarchies to feel the gravity (and repercussions) of one eventually breaking from their ranks. I don't think I'd have responded as favorably to Alps if I hadn't already seen the entirety of his work, but with most (all?) of those boxes now ticked I eased into this like it was an early garage cut from an underground band that has since refined its craft and moved on to larger arenas.