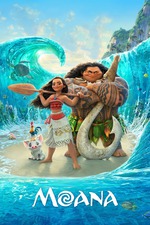 My DVD of this film had been missing for ages but my sister recently found it meaning we could finally watch it together for the first time and honestly, I was ready to love this film more than I did.

I’d heard a lot of great things about it from various people and there is a lot to like about it. The animation is indeed great and the songs do indeed absolutely slap which everyone knows at this point but yeah, on a story level I thought it was a bit generic and flat.

The whole film is basically a generic McMuffin-chosen-one-must-defeat-the-darkness quest towards a generic villain that feels more like a video game boss rather than a movie antagonist. I appreciate the whole “Te Ka is actually Te Fiti” thing. It makes for an elegant conclusion to the film but the character in question is still very basic.

Also, I didn’t really care for the dynamic between Maui and Moana. I appreciate that the film doesn’t make them fall in love by the end and it’s a nice subversion of a tired trope but their relationship is still a very generic “oh they hate each other to begin with. I wonder if they’ll conveniently become friends by the end.” dynamic and it’s played out in a very surface level way.

Overall, I had an alright time with this film. It has its moments of charm and fun but I felt it squandered what could have been a more emotional character driven story that was initially set up for a more generic romp with one too many scenes that felt like filler. I’m glad I finally saw it, but I’m not sure if I’d watch it again.

Also, I laughed a couple of times but generally, I wasn’t a huge fan of the film’s tepid sense of humour. I’m sure it’s great for kids but it’s not for me.

Evil Under the Sun

The World According to Garp