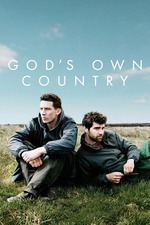 Here is a film that explores what love is and its many definitions.

Filled to the brim with thick Northern England accent with no subtitles to guide the viewer, I was frustrated that I could not make out what was being said exactly by the dialogue. I felt my dissatisfaction grow when it becomes apparent about fifteen minutes in that although words are scant, they command importance. This is especially critical because our protagonist is a person who is closed off, desperately lonely, and an expert when it comes to internalizing his thoughts and feelings. So I tried a different technique in order to try to understand: listen to the dialogue but do not hang onto them. Let the images serve as a guide to make sense of the story and its characters. It quickly becomes apparent that this is the preferred avenue to absorb this film’s quietly disarming power.

The picture presents a definition of love as a romantic connection. Numerous LGBTQ+ pictures, especially generic comedies and bad dramas, appear to write the material around sexual encounters and sudden twists of fate that lead to a happy or tragic ending. Not here. There is emphasis on fear of being alone for the rest of one’s life because one is gay and in the closet, how this fear is perverted into numbness, unexpressed rage, and self-sabotage which then leads to a consistent self-denial of perhaps connecting and exploring with another person who just might help to break one out of this cycle.

Johnny (Josh O’Connor) is tasked to mind the farm after his father (Ian Hart) had suffered a stroke which led to his paralysis. Johnny is reckless, unemotional, and prone to binge drinking after a long day of work. So that Johnny will have help during the lambing season, Gheorghe (Alec Secareanu), a migrant worker from Romania, is hired. Avoiding every trapping and predictable beats of the sub-genre, Gheorghe and Johnny establish a connection. Although they are far apart in personality, temperament, and view of the world, they actually like one another. Notice how writer-director Francis Lee employs minimal dialogue. Instead, emphasis is placed on how the two men look at one another, how they take up space when near each other, the silence simmering between them, and the amount of distance between their bodies when all they wish to do is embrace for hours.

The film, too, underscores love as passion for one’s work. In the beginning of the film, we assume that Johnny detests farm work through how he handles tools, interacts animals, the overall lack of regard on how well chores are done. In a simple but moving exchange between father and son late in the picture, we learn the truth behind Johnny’s actions. When it comes to Gheorghe, the elemental opposite of Johnny, it is ensured we appreciate details. We observe how he takes off the skin of a dead lamb, how he milks goats, how he cooks, how he operates machines. When Gheorghe is front and center of the frame, there is a much-needed moment of exhalation and tranquility. In other words, it is communicated to us, without relying on words, what Johnny sees in him.

Finally, the work highlights love as family. Again, the screenplay defies expectations. There is no critical moment in which Johnny must come out to his father or grandmother (Gemma Jones). There is no confrontation where one tells another that homosexuality is wrong due to some twisted moral high-ground or that because the Bible says so. Sometimes it is enough to show a person privately learning to come to terms with a knowledge or feeling one has. Furthermore, I loved that the writer-director is willing to show what stroke does to a person and how family rallies to take care of their loved one even through humiliating situations.

“God’s Own Country” is profoundly moving because it is filled with intimate moments. It requires the performers to communicate paragraphs using only their eyes or how they move their limbs just so (and when). On the other hand, it demands the viewer to be open to absorb the story, its vulnerabilities, quiet longings, and messages through unexpected means. Francis Lee should be proud for creating a standout directorial debut. I learned later that he grew up on a Yorkshire farm, and it shows. In some scenes, I could smell the blades of grass and the poetry whispered by the wind.

Mary and the Witch's Flower