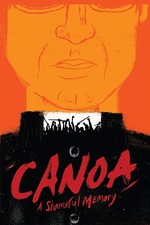 The movie clearly wants to reference the massacre of Tlatelolco of the second of October in 1968, but since the same piece of fascist shit that is PRI was still in government, and still is an important part of Mexican politics and its influences are still felt to this day, Cazals took the massacre of San Miguel Canoa, which happened weeks before the massacre of Tlatelolco, and explores how students were viewed, the massacre, and the control of the people the ones in power have, while also criticizing the extreme and manipulative religious influence on the country, and corruption.

The way the movie begins lets you know that they will die, giving the movie a sense of dread, making the scenes where the 5 friends hang out a feeling of sadness, the dialogue and delivery is just fantastic, it's so realistic.

The events of 68 are a shameful memory, but it's even worse when you realize the corruption and causes that lead to movements are still present in Mexican society.

Someone liked these reviews

Someone is using Letterboxd to share film reviews and lists with friends. Join here.