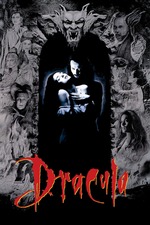 Francis Ford Coppola's version of Bram Stoker's much-adapted horror novel is a huge mess - but a beguiling, amusing and fascinating one at the same time. Gary Oldman is excellent in the title role and the visuals are beautiful throughout, almost in the manner of a Mario Bava or Antonio Margheriti film if they were given a $40 million budget to work with.

On the other hand, it's often maddeningly confusing and it's frankly difficult to work out exactly what Coppola was aiming at. Although the Italian-American auteur is most famous for his operatic The Godfather and its sequels, his roots were in the low-budget gothic horror quickies that he made under the tutelage of Roger Corman. Dracula attempts to meld both sensibilities but ends up falling between two stools. It's too campy and artificial to be treated as a heavyweight work, yet too elaborate and floridly romantic to possess the essential economy of a B-movie.

The acting is a mixed bag. Anthony Hopkins chews the scenery as Van Helsing but is let down by his accent, which slips back and forth between a vague Germanic brogue and his native Welsh tones. Winona Ryder is suitably impassioned but is saddled with an overly plummy English accent that stifles her usual dynamic feel for dialogue. Keanu Reeves is just awful, coming across like Ted Logan attempting to take the piss out of a young Victorian gentleman. Cary Elwes isn't much better in his endeavours to impersonate a wealthy Texan suitor.

Some of Dracula's physical incarnations are pretty ridiculous in themselves - in particular, the boob-headed Emperor Palpatine lookalike version seen early on.

Still, I can't say I was ever bored with all of this daftness and, as I've said before, it's an absolute feast for the eyes.