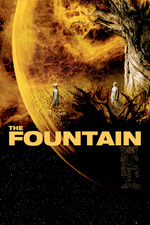 On the surface, this sci-fi saga is a quest of one man's thousand years struggle to save the very woman he loves and although the plot is quite complex for some viewers to follow, it eventually holds up well over repeated viewings. The story follows three parallel plotlines spanning over a thousand years, each set in a different timeline & carefully intertwined, but having the same purpose & pace in its journey from darkness to light.

The way director Darren Aronofsky has enveloped all of it into a central theme is very impressive but when it comes to the script, he could've done away with some of the unnecessarily added complexities without crippling the film in any manner. Cinematography is undeniably gorgeous while editing seamlessly transitions us from one storyline to another & keeps the pace of all three timelines constant to provide a more streamlined flow.

Coming to the performances, Hugh Jackman & Rachel Weisz each play three different sets of characters possessing same souls in their respective timelines and, for the major part of the film, balanced each other pretty well. Clint Mansell delivers again with yet another outstanding soundtrack, arguably his best work to date, which has a central theme to it just like the film's story & is at its finest during the film's climactic moments.

Yes, it is slow-paced. Yes, every frame of it is layered with themes, symbolism & motifs. And yes, it demands a lot of attention from its viewers and isn't for everyone. But if you're still willing to invest in it, you're halfway through to discovering something truly wonderful. On an overall scale, The Fountain is Darren Aronofsky's flawed masterpiece but a masterpiece nonetheless and someday, it will have the respect it truly deserves.

Harry Potter and the Chamber of Secrets

Harry Potter and the Philosopher's Stone