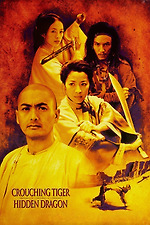 Winner of Academy Award for Best Foreign Language Film, Crouching Tiger, Hidden Dragon is an aesthetic, artistic & fascinating blend of intimate melodrama & stylised action that's notable for bringing international fame to the now-esteemed filmmaker, Ang Lee, and is also considered amongst the most influential & popular films to come out from the Chinese film industry.

Based on the novel of the same name, the story of Crouching Tiger, Hidden Dragon is set in a distant time in China and follows a gifted swordsman who one day decides to retire from his warrior life and plans to gift his treasured sword to an old friend. But when the sword is stolen by a mysterious fugitive, it is up to him to uncover the thief's identity and to retrieve the sword & return it to its rightful owner.

Directed by Ang Lee, Crouching Tiger, Hidden Dragon marks his breakthrough in the world cinema and presents the filmmaker in complete control of his craft. The film is shot in truly dazzling locations, unfolds in a poetic manner, and has an aesthetically pleasing aura to it. Cinematography is undeniably beautiful, the background score is mesmerising but Editing is tediously carried out for the pace is slower & runtime is longer than required.

Coming to the performances, the cast comprises of Chow Yun-Fat, Michelle Yeoh, Zhang Ziyi & Chang Chen with all chipping in with commendable performances. The wuxia martial arts is what caught the attention of most when the film premiered on the silver screen but it is the very reason that destroyed the whole picture for me. I don't have much to complain about other aspects but the wuxia action segments are so exaggerated here that it simply took the seriousness out of the story for me.

On an overall scale, Crouching Tiger, Hidden Dragon does score from an artistic standpoint and works best when approached as a fantasy. In my reviews for other martial arts features, I've made no secret of my disdain for this overly-stylised action choreography unless it's marketed as a comedy, so even if my rating may seem a bit harsh to the die-hard fans of this film, it has less to do with the film's quality and more with my inability to appreciate such gems. There's definitely an audience for films like these, it's just that I'm not part of it.