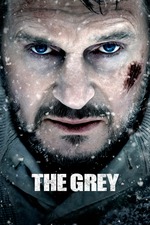 I didn't go to see this film when it was first released at the cinemas because I thought it was going to be a conventional action film showcasing new-old action hero Liam Neeson punching wolves in the face. It happened once, it was glorious, and I'm glad it didn't happen again.

A friend of mine however, did go to see 'The Grey' at the cinema, as he worships Neeson even if he is in something as awful as 'Unknown'. He told me that it isn't your typical action film, so I anticipated the release on blu ray (on which it looks stunning) and gave it a watch. Tip: don't watch this film on an early date with a girl you have only recently started seeing.

To say that I was completely shocked and blown away is an understatement, and this film completely went against my preconceptions of how I thought the film would go. Instead of a lame, run-of-the-mill action film, we are treated to a survival horror that explores existential crisis amongst middle-aged men who seemingly have very little to live for.

So with that in mind, one scene of 'The Grey' will terrifyingly show the group of plane crash survivors wading for their lives through deep snow from a pack of vicious wolves, keeping you perched on the very edge of your seat. The next scene though will completely slow down and put your emotions in a headlock, as the survivors sit around a fire and discuss the simple things in life (mainly family) that inspires them to keep on fighting.

On my recent re-watch, I was just as captivated and just as gut-wrenched, anticipating the dramatically and perfectly poetic ending - both excited and dreading it, a perfect ending if I've ever seen one.

And the film ends, the credits begin to roll, and I sit and contemplate what I have just seen for the second time. Then suddenly something else happens, a very short post-credit shot, rather than a scene, which somewhat changes my verdict on the film. Yep, you got it - until last weekend I wasn't aware that something happened after the credits. Fucking idiot.

The ending was still beautiful though.