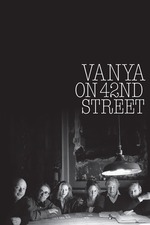 The bleakness of Chekov's play is in the idea of decay - decay that erodes the Earth, the home, the family unit, and ultimately, the self.

The play begins here in the middle of seemingly tangential dialogue, the conceit of a filmed play laying bare the necessity that the performance and consumption of art carries of the human soul. To perform this story is to immerse yourself into its rhythms, into its world, into its misery. Malle embraces the nature of performance as a form of identity, as Drive My Car would expand upon to even greater effect over 25 years down the line using this very same story as its basis.

The play itself: Uncle Vanya is a miserable man in the midst of a middle age spent in a middling life, in an estate shared by hopeless people whose hopelessness is amplified by proximity. The Professor is a sorrowful man in a crumbling body, married to Yelena, who has sacrificed her youth and her happiness to a prison of miserable domesticity. The Doctor, a so-called "great-man," suffers by exposure to this miserable clan, so wrapped up in the minutiae of their misery as they are, that to even know them is to be absorbed in the black hole of their existence. Sonya might have it worst of all - she is as young as she is wise, so full of potential as she is short on hope.

Watching this lulls you into the story, slowly but surely, as much a commendation to the filmmaking and performances as it is Chekov's script itself. Gutwrenching moments of character come seemingly out of nowhere, assaults on the heart that question the very nature of human purpose and happiness itself. Sonya's final monologue is especially Earth-shattering in the desperation by which she probes for some hope to free herself and Uncle Vanya from the hopeless toil and monotony of their existence, doomed to work until they are nothing but bags of bones following a banal routine, day after day, until the end of time.

There's hope in art though, as a desperate cry of its own against the banality and routine of modern life. To put these feelings to words, to let these words ring true across countries and languages and decades and centuries of time is to enter the tradition of fighting against that black hole, of creating art that can combat despair. There may be no hope for Uncle Vanya and his kin, but there is for us - we can learn from their mistakes, avoid what makes them suffer, cultivate good in the world through the goodness of our hearts.

Vanya on 42nd Street is a testament to this hope, to performing a soul-searing play in a crumbling theater, giving it a radiant breath of life that can give those chipped walls purpose. It is the medicine for melancholy, the antidote for animosity, the cure for coldness.

It is in art that we can find the words to make the world whole, and there is no greater plea to that hope than this film.