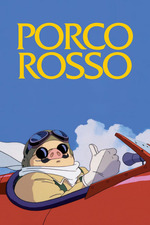 To excuse an indulgent (and likely unnecessary) comparison, the main thought I had on my mind when watching this was just how clearly this is Miyazaki's Indiana Jones.

This wasn't for the obvious parallels, although those are pertinent; both are decidedly anti-fascist adventures with a big focus on Italy (The Last Crusade, at least) about a slightly jaded hero with a misanthropic streak and a heart of gold. This is still surface level stuff though, and certainly not worth commenting were that the extent of it. The comparison comes clear to me with the intent of the films, with the love and energy put into them in a way that speaks to a mode of storytelling and way of life long left to the wayside.

Part of this is because both are total indulgences in passion products that, under the hands of masters like Miyazaki and Spielberg, look as if they could make these things in their sleep. Indeed, I'd almost call this film effortless were it not for the staggering amount of effort that has clearly gone into every single frame of it - 2D animation has never looked so spectacularly dynamic and totally perfected as it does here, with the mechanical frames that drive the story (a nightmare to animate, I'm sure!) given such a level of character and vivacity to truly take on a life of their own. This is also something of an unexpected grace note on pure 2D animation as a craft; by even 1997 Ghibli was adopting 3D techniques, inadvertently making this the end of an era of animation in its own way.

Regardless, the spectacular warmth and cartoonish joy that populates almost every frame of this movie is it's greatest distinction. It's a pure adventure through and through, and so much doting attention is given to the smallest details in that special Ghibli way, while simply sweeping you off your feet at almost every moment in a way only Miyazaki is capable of. This too begs the Indiana Jones comparison - were it not for the deeply personal touches that populate that series, they too would likely be seen as somewhat more frivolous as works unto themselves, beyond the staggering technical merit that makes both Rosso and Jones world class adventures in their own ways. But much as Spielberg (and Lucas!) romanticized (and in the process, eclipsed) the adventure serial, Miyazaki too essentially did the same for that special brand of wartime adventure from the golden age of Hollywood.

Unlike serials though, all films must eventually come to an end.

Like I stated in my last review (over 2 years ago, how time flies!), this is clearly Miyazaki's tribute to Classic Hollywood films, to a specific kind of warmhearted adventure about heroes caught in messy situations who have to reconcile some part of themselves in order to get by. This is much more Casablanca than it is a serial though, and in a way I wasn't open to on the first viewing - an ending I took as coming all too soon on the first go around is perfect here when considering that the entire movie is an ending unto itself, for an entire world and era that can never come back.

It is in this way that the most understated moments of this struck out with a staggering resonance this time around. The scene above the clouds (you know the one) might be the most impactful, somber, and perfect image of Miyazaki's career - it is a eulogy for all those lost in the skies, for all the aces who fly no more, so perfectly literal and profoundly abstract in the most vital way imaginable. Potent signs of a world in transition in the wake of loss lie beneath every moment of jubilant freedom in this story - pilots are military dogs and planes are no longer objects of beauty in a world that leaves men (or rather, pigs) like Porco behind - the romanticism is a mask to hide the sorrow, and what a wonderful mask it is!

While I'm not sure I could ever have the courage to call this Miyazaki's best, I'm certain that it is one of the best, ever. There were so many times washing this when I felt beyond emotionally attuned to the story at hand, crying with joy as pigs fly and crying from genuine sorrow knowing just how heavy the weight those clouds carry truly are. That the movie can speak so deeply to such nuanced and challenging subject matter while always being an effervescent adventure first and foremost might be the greatest miracle of all.

Ace pilots no longer roam the skies. We're no longer fascinated with war heroes and pirates and with old world charms of old worlds past. Porco is the last of a dying breed, a stubborn pig in every way, and all the better for it. The final dogfight isn't the finale of a movie, it's the finale of an era, closing the book on a way of life that will never return, on a moment in time that is as endearing as it is terrifying for Miyazaki to capture. Wherever Porco's plane will take him next doesn't really matter knowing this - the world only has so much patience for stubborn pigs resisting the endless crawl of time.