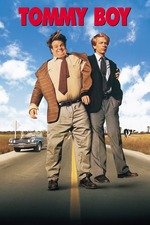 Peter Segal's "Tommy Boy" is an ideal, if completely unsophisticated, blend of physical comedy, verbal wit, and personality. It may not be smart, but the story of a college graduate trying save his father's auto parts factory sure is funny.

The laughs in "Tommy Boy" come at a quick clip from the film's outset. Its plot revolving around the titular Tommy Callahan, the comedy follows as Tommy and a company accountant hit the road for the good of the Sandusky, Ohio-based factory. The story does not offer much originality, but it is an ideal foundation for the film's physical gags, odd couple hijinks, and verbal barbs.

Segal directs with an eye for letting his cast be the center of the lived-in looking production's attention. As Tommy, Chris Farley offers a high-energy, upbeat, and delightfully buoyant performance. It may be the late comedian's tour de force, and he is gleefully and comedically charismatic. As the other half of this road duo, David Spade is magnetically smug and sardonic. The two make an excellent pair.

The chemistry between Farley and Spade powers "Tommy Boy" to consistently funny heights. Though the film loses some steam as it coasts to its climax, it still provides an up-tempo and engaging ride. It is a good-natured and fully quotable comedy full of solid heart and hearty laughter.