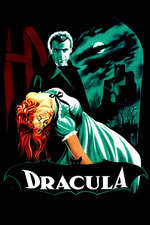 There is something admirable about the restraint found in Terence Fisher's "Horror of Dracula." Hammer's first entry in its long-lived Dracula franchise, the film is never meditative; it is, however, broodingly controlled, exuding a very straightforward, tame, and decorous sensibility. Even the film's atmosphere is understated. Despite this calm, there is much lurking under its stately surface, making the film a high-quality horror outing.

Taking a few liberties, "Horror of Dracula" presents a recognizable retelling of Bram Stoker's novel. Harker, Holmwood, Lucy, Mina, and Van Helsing are all on hand. Count Dracula, largely absent in his own story, makes enough appearances to ensure that his presence is felt. The narrative generates a compelling fight against evil in the form of a tall, cape-wearing member of the undead.

The production feels small-scale, though its design provides for nicely appointed sets and flowing, era-appropriate costumes. Fisher composes a handful of interesting shots, but most of the action is staged in a stolid, theatrical manner. The atmosphere and color for which Hammer's horror productions would be known is on display; but colors do not yet pop, and atmosphere does not yet pervade. Still, there are misty flashes of style yet-to-come.

Starring Peter Cushing, Michael Gough, and, as the Count, Christopher Lee, the cast is iconic. Each actor is committed to his or her role with a solid earnestness. There is no winky irony to any of the acting. The actors give mannered, restrained performances, but an underlying energy and urgency is present.

That energy is also present under the surface of the film. While, Fisher's take on the story and characters is, on the surface, stagy and cold, some sequences exude a haunting, dangerous, and sexy pulse that serves both the film and its metaphors well. It is this pulse that makes the film stand out as memorable and effective.