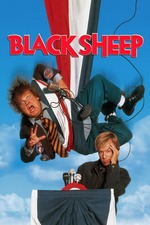 Loud, dopey, and semi-fun, Penelope Spheeris's "Black Sheep" is a watchable comedy, but it never inspires real enjoyment. Reteaming the SNL and "Tommy Boy" duo of Chris Farley and David Spade, the film is not able to recapture the chemistry of the latter or the irreverence of the former. "Black Sheep" offers its share of laughs, but those laughs are played at such high volumes that they can quickly try the patience of its audience.

Revolving around Farley as the brother of a gubernatorial candidate, the film follows as Spade's low-level political operative is assigned to the brother to keep him out of harm's way and the media's glare. Of course, things backfire, and the plot becomes a hodge podge of clumsy character beats, comic set-pieces, and the odd witty moment or two.

Spheeris keeps her focus on Farley and Spade, and the two comic actors play off each other well. The comedy is loud and energetic, but it never truly engages. Farley and Spade provide upbeat color, but the production never leaves its mark.

Completely watchable but mostly forgettable, "Black Sheep" is a decidedly mediocre experience. Farley and Spade supply some solid laughs, but the two are unable to elevate the film as a whole.