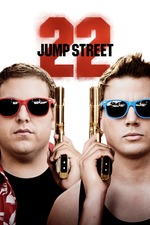 Comedy sequels are dodgy propositions. Try as they might to duplicate their predecessors' successes, the follow-ups usually rate as lackluster retreads of the original films' formulas. Recent film history is littered with part twos that come nowhere near the effectiveness of their part ones. Phil Lord and Chris Miller's "22 Jump Street" understands this and revels in it. The film is a rare comedy sequel that works as well as its first chapter, skewering the idea of comedy sequels and offering consistent hilarity.

Smart and self-aware, "22 Jump Street" finds its undercover police officer protagonists, played gleefully by Jonah Hill and Channing Tatum, back on the job, tracking drug dealers on the campus of Metropolitan City State College. The story is less important than the physical, verbal, and character-based gags, but it offers enough of a narrative excuse around which the film can be built.

Hill and Tatum are in rare comedic form, their outstanding chemistry and comic charisma permeating every scene. The actors are great in their roles, and whether their lines are improvised or written on the script's pages, Hill and Tatum appear to be having more fun than should be allowed on film sets. The two, delightfully and energetically, drive the film's comedy.

That comedy comes in wall-to-wall bursts of physical, verbal, and character-based hilarity. This, like the first film, is not a straight-ahead adaptation of the television series upon which it is based. It is a raucous send up that not only plays the series's original premise for laughs but also lovingly parodies big budget, cinematic cop sagas and romantic dramas. The film also gets a lot of mileage poking at sequels in general.

"22 Jump Street" is not just superficial satire that takes giddy swings at pop culture touchstones. The film has a heart. Communicated in themes of friendship and belonging, "22 Jump Street" allows for one or two moments of emotion among its mirth.

All of this comes together in a rollicking package that could make "22 Jump Street" the comedy of the year. The film is a hilarious, continuously pleasing joyride, offering truckloads of rude and rowdy fun.