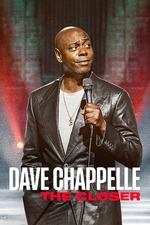 So here's a fun fact: I had never seen a Dave Chappelle special before tonight. I had never seen Dave Chappelle's Block Party, I've never seen an episode of his show. I'd only seen a YouTube clip of that "Blind Racist" sketch some years ago and that's about it. So when I decided to watch this for some incomprehensible reason, I thought that it would be a situation where I'd have to admit that his craft and delivery as a comedian was expertly gifted even as I hated whatever it was he was saying.

I didn't laugh once in this special, and not even because of whatever basic transphobic nonsense he was peddling. It just seemed clear from the first frame that this was a man who'd lost "it". You could grasp some slivers of "it" and what "it" used to be, but you'd know "it" was dead and won't be coming back any time soon. By the third or fourth time you hear him say to himself, "Oh, I'm in trouble now!" like a snickering twelve year old who thought he could say "fuck" at the dinner table, it's painfully clear that the problem isn't that Dave is behind the times, but rather he's found a comfort zone where he can coast on not even bothering to be funny anymore for the rest of his career.

One of the first jokes of the special is Dave workshopping some twitter shitposts in his drafts like I would, except he's being paid millions of dollars for them. "I have a good movie idea," he begins, "About aliens who were originally from earth but left millions of years ago, like an advanced ancient civilization." Hmm, I'm wondering where this'll go, you wonder. "They travel through other planets dealing with problems along the way, but eventually they come back to earth and the current denizens don't want them back." Uh-oh, could this be the set-up to something that's actually about us?? "It's called Space Jews," he concludes with only the most obligatory laughter from his audience.

But that's beside the point, because the rest of this special is devoted instead to defensive musings about why he's been cancelled, why women don't like him, why ~the gays~ don't like him, why ~the trans~ don't like him, and why J.K. Rowling has some good points, actually, because TERFS see trans women the way black people see blackface. To his credit, Chappelle at least takes time to clarify that he really hates the white, liberal flavor of feminism and LGBTQ activism that, not to his credit, many funnier queer comedians of color have lampooned better. Almost as if Chappelle, as ever, thinks of trans people being mad at him as a white-lib thing to deflect from all the queer folks of color who've been yelling at him even louder.

But see that's not enough for ol' Dave Chappelle. He's also gotta ensure he's not *actually* transphobic by invoking a white, trans woman comedian he was friends with named Daphne Dorman, and he does so with the same zeal that MAGA-hat wearers invoke their one black friend who said it was okay for them to say the n-word. This story, in some instances at least affably charming, culminates in the reveal that the trans woman in question committed suicide, deployed in the same "gotcha!" trappings he had decried earlier when Dorman's own mother tried to get him to admit her trans daughter is beautiful while he didn't know she was trans.

I don't know much about Daphne. She may or may not have laughed at Chappelle's trans jokes like he describes in the story, and that's fine. I've honestly laughed at worse shit because being trans is fuckin' weird. She may have even been actual friends with Chappelle like he describes, and that's cool too. I mean, if a millionaire comedian thought I was cool, I'd probably be okay with whatever foul shit he said too.

But at a certain point, Dave culminates in a very coy maneuver that gives the game away, framing Daphne's suicide as something that happened right after she defended him on twitter and a bunch of other trans women dragged her relentlessly online. "I don't know if that's the reason," he says, "But it certainly didn't help." It's here that Daphne's very real tragedy, something awful and unfathomable that unfortunately happens to trans women and men on a daily basis, becomes a kind of martyrdom for Chappelle. A woman who bore the brunt of the trans hate mob to defend the so-called transphobic Chappelle from cancel culture. "She wasn't part of their tribe, she was part of mine."

Chappelle, admittedly, puts his money where his mouth is and says he started a trust fund for Daphne's daughter, but not before he could turn her narrative into his own. After Hannah Gadsby's Nanette, much ink was spilled over whether it was actually a comedy show or more of a one-woman act. For The Closer, I wonder something similar as well. Is this a Dave Chappelle comedy special, or is it a rally?