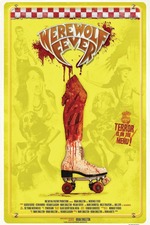 I weep for the world when a movie as fun and entertaining as WEREWOLF FEVER gets trashed. It is, of course, not a great film but it is a good one. And we're not dealing with a big budget Hollywood production with dreams of Oscar gold. One look at the cover (featuring a half-eaten, bloody leg wearing a roller skate) and the viewer should know right away that WEREWOLF FEVER is meant to be a fun monster movie. And that it is.

At a trim 66 minutes, the film is directed with energy and economy. In fact, it's even shot extremely well; it doesn't have an "ultra-low budget" look to it at all. The werewolf (which I've heard get a lot of stick for looking bad) is quite serviceable and I think it's rather distinctive look works for the movie. You don't really want a werewolf costume that looks like every OTHER werewolf costume, do you? If I ever see an uncaptioned still of this film's werewolf, I will immediately recognize it as the WEREWOLF FEVER werewolf. That's a plus in my book. The acting, it's true, is probably the weakest aspect of the film but it's adequate enough not to hurt the film.

The movie takes place in a present-day car hop burger joint (a la Mel's Diner). The restaurant's staff waits for another employee to return with a new order of restaurant supplies. Sadly (or, for the viewer, GLADLY) the employee gets bitten on the drive back and turns into a werewolf who shows up back at the Kingburger after nightfall and starts making bloody takeout orders of his own with the restaurant staff. And yes, the cover-featured "bloody leg on a roller skate" actually DOES appear in the film! How's that for truth in advertising?!?!

So WEREWOLF FEVER is not a classic by any means but it is a sincerely-made, hoot and a howl horror movie that was actually much better than I expected it to be. Enjoy it for what it is: a lot of fun! I would certainly rather watch WEREWOLF FEVER 20 times back to back than to sit through AVATAR of VAN HELSING again even once. And that, for a movie buff, makes it worth your time.