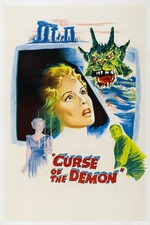 I first learned of this film years ago while trying to figure out where the "It's in the Trees! It's Coming!" sample from Kate Bush's Hounds of Love came from. Turns out it's this movie.

This movie begins with a man being attacked by a demon. It should not have started that way. I believe we never should have seen the demon at all. The film designates skeptic, psychologist, and all around he-man, Dr. Holden, as the film's protagonist. Holden believes in science and the imaginative powers of the human mind. He scoffs at witchcraft and magic and believes everything has a logical, albeit psychological, explanation. The issue with Holden, however, is that we know from the very start of the film that he's wrong. We know demons exist because the film begins with one. This is not a Scooby-Doo Whodunit, there's no indication that we're ever supposed to think there's a logical explanation for the demon. Thus, we just view Holden as a stubborn idiot who barely behaves like a psychologist as he struts his manliness and hits on the daughter of his late colleague (who was mauled by the demon).

A man named Karswell is an Aleister Crowley-like figure who leads a "cult" that we never actually get to see. He's in some ways the antagonist, but his character is never really developed in any satisfying way. (I like the part when he's outside wearing clown makeup. Out of context, that scene feels very surreal.) But in reality he's just a victim to his own ego. Like Icarus, he flew too close to the sun and summoned a demon that he has no control over. He's running from his own mistakes. There's a lot more potential for sympathy in this character. Especially since we, the audience, know that he's right about the existence of magic and demons, and that Holden is wrong, from the very get go.

This movie has a ton of potential. It's one of the few movies that I think could benefit from a remake - one that can really push the psychological suspense, and make the audience truly wonder if demons exist.