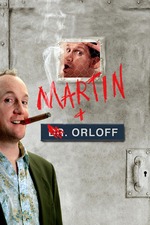 ”Marty, this will be good for you”

When a tragic eggroll accident causes Martin to attempt suicide, he's in need of a good old-fashioned therapy session like the kind you'd see in the movies, but what he ends up with is the kind of therapy session you’d only see on the Upright Citizens Brigade.

This film is like a sort of comedian sightseeing tour. Full of H. Jon Benjamin’s pooping, David Cross’s brick throwing, and a Tina Fey, Janeane Garofalo, Rachel Dratch, Southern Belle dinner-theatre about the hilarity of suicide.

Cheers to Frump for making me aware of this ultra weird cautionary tale on the pros and cons of mascot costume design, a highly strategic mannequin technique, and the world’s hardest rescue attempt.

BEWARE: The budget of this entire film is obviously cheaper than a single comedy central episode… but then again who needs to pay for a four foot stuntman when you've got a sister who knows a troop of Bonfire Girls who are perfectly willing to perform for free.