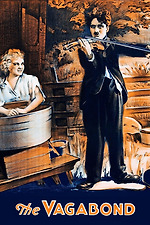 "The awakening of real love."

A dispossessed fiddler (Charlie Chaplin) rescues a kidnapped damsel (Edna Purviance) from a pair of nomadic slave drivers, but can he win her affection over the suave young portraitist who inadvertently reunites her with her mother?

Though comparatively commonplace by his own monumental standard, Chaplin's third Mutual two-reeler The Vagabond is still dotted with instances of comic brilliance and is noteworthy for its liberal dose of melodramatic pathos. In the restored version hosted by Criterion Channel, Chaplin is simply credited as Street Musician, but rest assured he does plenty of classic Tramp stuff (e.g., bludgeoning dudes, stealing, falling in water, seducing women). The funniest moment occurs when Chaplin bursts the end of a papier-mâché branch over an uncredited villain's head and merely turns it over in his hand rather than retaking the scene with a new prop. Leo White plays not one but two ethnic stereotypes well beyond the 21st century pale.