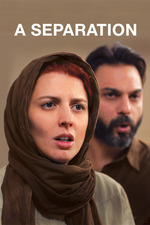 One of those cases where although I’m emotionally mixed on certain aspects (unrelated to the film’s brilliant sense of moral complexity), it’s simply undeniable that this is one of the most impeccably crafted films I’ve seen in a long while. Everything from performance, writing, cinematography, direction, and pacing. It’s also just insanely unpredictable, adding layers of political, social, and cultural context to what could have just been a clichéd divorce story. And that’s where my biggest issue with this film lies…

I feel that for a film called A Separation, with an opening scene introducing these characters in a divorce court discussing the practicality of said decision, it seems as though there’s very little of the actual separation discussed. The wife is gone for almost the entirety of the first act, and when she’s reinserted back into the narrative, the film pretends as if her character has any weight in the story at that point. It’s possible I wouldn’t have given much thought to it if it weren’t for the fact that neither her or the husband seem to have much prior development. Yes, they have their reasons for wanting to separate, but there is CLEAR turmoil between that goes far beyond that. And it only rears its head again in an argument scene later on when the husband calls her a coward. Because of this lack of character building, there are certain moments (like the ending) where I’m not left as moved as I know I’m supposed to be.

The crazy thing, though? This film is STILL completely mesmerizing despite all that, and I care about the characters so deeply. Like, at any given moment I am totally wrapped up in everything the film is showing me and I’m always in awe of Asghar Farhadi’s ability to objectively and naturally depict these events. In my opinion? Get rid of the divorce aspect, at least until the very end, and you have a true masterpiece. A story with this level of immediacy doesn’t deserve a subplot that requires visual and scripted context alongside it that isn’t expanded upon enough.

Still, it’s obviously a fantastic film, and one that I’m incredibly excited to see again. And who knows? Maybe it’s possible that I just missed some things on this first watch. See it!