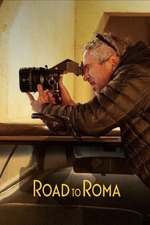 I still have yet to officially log ROMA itself, but upon watching this making-of documentary, I felt compelled to write... something, about this masterpiece. I first saw Roma at the Telluride Film Festival, with Alfonso Cuarón in attendance to introduce the film. The two hours that followed quite literally changed my perspective on cinema, for the second time, experiencing a Cuarón film- Children of Men was the movie that first opened my eyes to the possibilities of the cinematic form. Watching Cuarón direct is truly something special; the way he respects the camera, the warmth he shows his crew, and the patience & play he exhibits with the child actors. It's watching a man who has such an absurd grasp on the craft and its conventions, that he's also able to let go and create something wholly unique. The last lines of the documentary come from Alfonso as he says that in many ways, he views Roma as his first film, because the process and meaning behind the details in creating the universe of the film were new, and for the first time, he's captured the kind of cinema he aspires to create. I find it really beautiful that a director of his acclaim and with such an impressive track record, can find a period of rebirth in his work. In the beginning, Cuarón talks about how cinema is inherently tied to loneliness, which is fully true; yet watching the collaborative nature of his work, it's no wonder he's able to find the perfect balance between epic & intimate. Roma is one of the greatest films of the century.