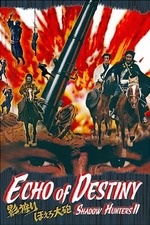 The Three Amigos are back in this sequel to Shadow Hunters - both made in the same year. There was not a third in the series but about ten years later there was a Japanese TV show. The three friends are Ronin - all having lost their master to the deceit of the Shogun and his Oniwaban (government Ninjas called Shadows) and their prime purpose for living and not dying with their master is revenge. Simply to kill as many Shadows as possible - thus called Shadow Hunters. And kill them they do. By the end of these two films the Ninja population was dramatically smaller. As is true of the Kunoichis - female Ninjas. This film introduces a number of Kunoichis into the story line and that is always a good thing. Their main weapon is seduction and a needle in the neck while in the act of sex. Which strikes me as very cruel. At least let the man finish. That is only being polite.

The film takes about one second to bring on the gore and action. The Shadows attack the Shadow Hunters separately - Jubei (Yūjirō Ishihara) is in a hot spring when five friendly ladies appear and take off their clothes and flirt with him - in hopes he would let his guard down. They were wrong. Jubei has lost interest in women since he had to assist his master in Seppuku years before. Not the same with Sunlight (Ryōhei Uchida) who has a problem keeping his zipper up and tries to nail every woman in sight - most who turn out to be killers. He is caught again by the Ninjas in a prone position. Finally Moonlight (Mikio Narita) is in the middle of gambling when a band of ninjas interrupt. Bad idea.

This time a small Daiymo hires them to transport a huge cannon from where it was made up in the mountains to their castle through rough terrain and many ambushes. Weapons have been outlawed by the Shogun and if they are shown to have a working cannon they will have to give up their lands. They are joined by the daughter of the cannon maker who is played by Junko Natsu (Three Pretty Devils) - and it is her performance that gives the film some emotional weight. Like the first one the film suffers from ninjas basically running into swords like blind lemmings. The Ninja Association should have sued. Still a few great kills - sword through the mouth and one through a woman's breast - with blood spurting like an Olympic event.

Yūjirō Ishihara was a top star in the 1950s and 60s - Season of the Sun and Crazed Fruit are considered two of the classic New Wave films - but I have to admit to being unfamiliar with him and checking out his filmography I don't think I had seen any of this films till now. In pictures I see of him in his early days he was quite a handsome cool looking guy but by this time he has put on considerable weight and he often looks bored. Still these are fun trashy films and I wish there was another.