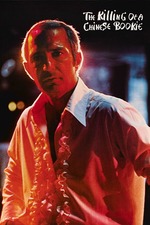 With the exception of Mabel in 'A Woman Under the Influence,' I don’t know if Cassavetes ever gave us a better "self-portrait" — with so many of his personal insecurities and struggles on display, as well as his singular drive for creative freedom — than he did through the characters of Cosmo and Mr. Sophistication in 'Killing of a Chinese Bookie.' Cosmo finds freedom through putting on his act. As he says, he only feels like himself when he is playing a part. His club is where he can be who he wants to be: that self-styled man of comfort, the cool master of ceremonies who writes all his own skits and holds creative control over the productions. He makes his dancers and performers feel like themselves in the best possible sense. In his relationships with them, Cosmo defines them through their ability to perform; he is not judgemental of who they are in the "real world," but by their style and who they become onstage. His club is an artistic alternate universe to the gangster-infested world outside. The shows that Cosmo and his performers put on for their audiences are utterly bizarre, and the club isn’t free from judgement, humiliation or failure, as there are frequent disgruntled crowds and money is always tight. But the Crazy Horse West is a space where Cosmo and his performers can all live creatively and Cosmo puts everything he has into it.

As Cassavetes has said, real gangsters are the people who impede upon the lives of dreamers like Cosmo. The gangsters in 'Bookie' are not the flashy movie mobsters of Hollywood, but money and contract-obsessed businessmen — they are more like accountants or movie producers (Al Ruban, the film’s actual producer, plays one of them) than Bogart or Cagney. They are exploiters and manipulators of systems rather than tommy gun wielding brutes. When the film challenges them to act like "movie gangsters," running after Cosmo with guns and following through on murder contracts, Cassavetes shows them to be caricatures, or as Cosmo says, "amateurs." But the sad truth that this film expresses so viscerally is that in order to cultivate that creative world elsewhere, in a place like the Crazy Horse West, so often the only way to get it or sustain it is through means that anchor us in that gangster world of selling yourself and conforming that one is trying to escape. Cassavetes captures that fight to be yourself so beautifully and brutally in this film. Upon this viewing, I would probably place 'Bookie' behind only 'Faces' in a ranking of Cassavetes’ best work.

Sidenote: I have read that David Bowie visited the set of 'Bookie' and sat in as an extra in some of the club scenes. Has anyone ever spotted him in the film?