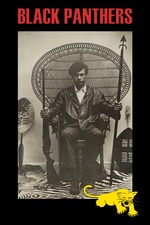 Another day, another Varda film. This time, it's a short documentary focused on the Black Panthers in the late 1960s. So it was put out after the murder of Malcolm X, shortly after the murder of Martin Luther King, Jr., in the midst of centuries of disenfranchisement of, discrimination against, and enslavement of black people in the US.

And here comes this well-respected French woman into the middle of Oakland, into the middle of a Black Panther rally. I love the audacity, the fearlessness, the compassion. Agnes is able to interview and showcase the views and philosophies of these various members with maintaining their humanity and humility. She juxtaposes the hardness of the adults with the innocence of the children, the vibrancy of the musicians with the sternness of the guards.

Again, much like her other shorts, I wanted more. More content, more depth, more runtime, ultimately. Black Panthers covers an important period in our country's history, and covers a movement that is oh so relevant today. I just wish there was more meat to this bone, because what meat I had was delicious.