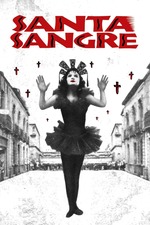 Jodorowsky's sort of like one of those dawn of rock n' roll guys for me. You gotta be willing to either skip over the "personal life" section of his wikipedia or you've gotta just take a step back and be like "huh! Weird guy!" If you can't do that, buddy I get it. I can't do it with Woody Allen. But in my defense Allen never made a movie that comes within spitting distance of this, visually or conceptually.

Jodorowsky's movies move like dreams and feel deliberately designed to shock and upset you. But for whatever reason they never cross the line into tedious "look at me mother, I'm misbehaving" edginess for me. If you've spent any amount of time around 20 year old boys you know firsthand how hard that needle is to thread. A great example is during the scene where Fenix and the guys with down syndrome go to see a movie but are led astray by a pimp who gives them cocaine. Just typing that made my skin crawl for like four different reasons but it never really goes where the pit in your stomach thinks it's going. Instead of some sort of Pinnochio morality tale playing out, Fenix and the boys have a wonderful time. Everybody is safe, they just have a great time doing coke and walking around while fantastic brass band music plays. Jodorowsky is morally driven, but his morality is too weird and probing to ever fall into Goofus and Gallant territory.

Early on the movie teaches you to abandon your expectations ("Forget everything you've ever seen!") and just go with it. An elephant is buried in a trash-filled ravine only to be instantly torn apart by hungry, baby-powder drenched ravine people. A cathedral with a pool of holy blood is revealed to be paint and demolished in a scene the Pythons could've conceived if they were ever truly open to the ideal of divine miracles. Jodorowsky is open to the divine. He's got charlatans and devils like Orgo and the tattooed lady abound but you don't make a movie like this and then try to actually tie it all together in the last twenty minutes if you don't believe in miracles.