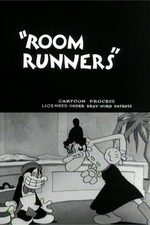 Ub Iwerks is sort of the Nikolai Tesla of American animation if you happen to believe that Nikolai Tesla wasn’t actually that great, which I don’t. But maybe you do. I have to calibrate for every possible reader. Depending on who you ask, Iwerks was either a creepy jerk who was impossible to work with or a long-suffering artiste who was exploited by the big bad Walt Disney machine. Both likely have some truth to them, and if you use what we know about literally every single other person who worked in animation during the 20s and 30s the truth is likely the version of the story that casts them both in the worst possible light.

Something that I’ve never seen come up in this discussion but that we must consider after watching Room Runners is that Ub Iwerks left Disney to pursue his dream of drawing between 8-100 nipples in every cartoon he made. This short is lousy with exposed nipples. The nipples in this cartoon hang heavy in the air like moisture on a hot August night. Around every corner lies a naked lady waiting to either scream in terror or dance proudly, it’s all the same to Iwerks. I use the term “naked lady” because they all seem drawn from the perspective of a nine year old boy looking through a hole in a wall. These naked ladies tower over Flip. There’s a fear that animates all of them. It’s possible that Iwerks never had sex. His two children would likely dispute this but the words of crisis actors must never be heeded.

By this point in his short, troubled life Flip the Frog has basically stopped being a frog. He was about 30% bug and 70% an uncomfortable reminder of early animation’s ties to minstrelsy. I don’t love it. He clearly started out as a frog, as the title card where he plays piano and sings “bub bub” in a grotesque baritone make clear. But then the cartoon begins and you can’t help but go “gyeah” at the sight of him. It’s unpleasant.

I’m told this is one of the better Flip the Frog shorts and despite most of what I’ve said in this review I believe that. Would honestly watch it again.