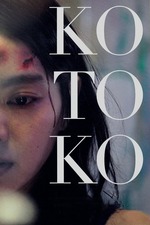 I get annoyed with middlebrow horror snob opinions like "jump scares are cheap" pretty easily. Whoop de shit. You either got embarrassed watching a Paranormal Activity movie and have never forgiven "jump scares" or you parroted somebody else's opinion to sound like you know more about a genre you probably just don't actually enjoy very much. Just own it, coward. And don't give me that "I just don't like cheap jump scares" bullshit either. Cheap jump scares rule. You're freaked out because you're programmed not to like getting killed by lions. It rules that we figured out how to just touch that button and we slam it over and over for entertainment. Go watch The VVitch. I liked The VVitch but go watch it.

Kotoko rules because it has no sense of hierarchy or decency when it comes to scares. At its core it taps into the primal fear of "what if I did it?" that lurks over the edge of every height or within every small thing that relies on you to protect it. It's a sick question most people learn to look away from in childhood and so if you really want to answer it you have to be willing to go to sick, distasteful places. There's an image in this movie so fucked up and visceral that I don't know if I'll ever be free of it. But it's a gory jump scare. Its potency doesn't come from the gore or the shock or from the harrowing buildup so much as it comes from all of them working together to create a sense of "oh my god are we actually about to do th-" before it hits you a split second before you can brace for it. It's a brutal moment, made all the more brutal by the fact that it's shot like home movie footage, the same as an unbelievably tender and vulnerable moment earlier in the movie.

The movie never settles into one particular type of rhythm and so you never learn how to put your guard up. Kotoko slits her wrists and it's stomach churning until it becomes a Marx Brothers routine of looking for "the right towel" to clean up. It's clear from the first scene that this is the same Tsukamoto who made Tetsuo The Iron Man but this film uses its maturity as a weapon, letting up and luring you in to hit you harder.

I can't speak to the mental illness angle of this movie so I won't bother. Probably nails it but as always: don't yell at me. All I can say is that it explores that lingering question of "what if I did it?" and has the courage to answer by letting you know exactly how painful it would be.