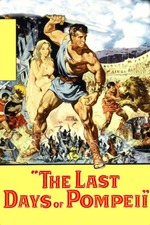 Part disaster movie, part sword and sandal epic, THE LAST DAYS OF POMPEII reveals its dignity only after you've seen Steve Reeves wrestle a rubbermaid crocodile underwater and bend its jaws back to its spine. There's also a fantastic volcano eruption at the end made with fireworks and sparklers while people scream and run about. Unfortunately, this isn't the B-picture Sergio Leone is known for, who replaced original director Mario Bonnard after falling ill on the first day of shooting. Leone may have been shy and wanted to remove his name from this cookie-cutter spectacle, but I'm always impressed by the level of technical production that goes into these pictures. The ability to wrangle thousands of extras and countless set pieces is not an easy chore, even if the end result is rather bland, uninspired and lacking personality. Still, watching Reeves joust a lion is not to be missed. Genre lovers will find themselves wanting more disaster and less political scheming, while Leone completionists will simply be happy to put their disorder to rest.