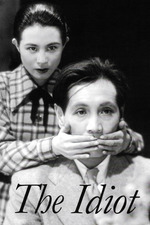 The story of a pure-hearted, Christ-like fool living in a corrupted, unChrist-like world, struggling in vain to heal the crowd of sick around him, ridiculed and misunderstood by those who care only for money and social status, makes for one of Dostoevsky's most puzzling, philosophical entries.

Yet I think I prefer reading Dostoevsky than watching Dostoevsky. His stories are expressive, long-winded, and overwrought with knotted, tangled relationships. You almost need a flow-chart just to keep track of all the names, roles and how everyone relates to everyone else. When you have time to pause and ruminate and soak in each sentence, each paragraph, the text has a way of coming alive in ways that, to the contrary, feel rushed when watching, yes, even a 3-hour feature. Dostoevsky uses a lot of inner-conflict, inner-monologues throughout his work, which works wonderfully in a literary format but struggles to visually bend to the language of film form.

Out of the few cinematic adaptations I've seen, none of them have really delivered anything beyond a transposition of the books themselves. Kurosawa's attempt, while earnest in its execution, feels more like misguided reverence cast from a desire to translate the untranslatable.

Put differently, everything I love about this film already comes directly from the book itself, which gives the film a lot of literary kudos but not a lot of cinematic quality. To squeeze the spread of this story into 166min, Kurosawa has to get bookish by relying on a series of intertitles to set forth the complexities of the book's exposition, which resulted in a pretty haphazard, painfully fragmented viewing experience.

Thankfully the storytelling outgrows them as it proceeds, but man, if I hadn't already been familiar with the story I'm pretty sure I'd be confused and find this film very difficult to follow.

Having mentioned the film's runtime, I learned while prepping for this review that Kurosawa had to trim down from a 256 minute cut, which actually explains quite a lot. It's unfortunate we'll never get to see what Kurosawa originally intended, because the version we have is a pretty bland, uneven re-contextualization of the original text. For as powerhouse-hitting as Setsuko Hara, Toshirō Mifune and Masayuki Mori are, the chemistry between them is simply lacking and crippled by the film's erratic editing. Now that I think of it, Dostoevsky's work might actually be better suited for television than a feature length film, if only to allow more time for the characters to breathe within the density of the plot they're made to wander in. Still, I have my doubts. I applaud Kurosawa's attempt to translate an extremely difficult author to the screen, but I have to wonder how much of the auteur syndrome plays into the film's gilded reception.