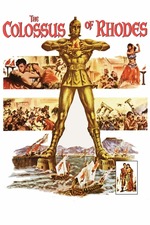 Another big-budget yawn from Sergio Leone, similar to THE LAST DAYS OF POMPEII. His first credited work as a director, too.

I was beginning to wonder how he'd been given the opportunity to make such lavish sword and sandal epics considering a). the risk involved on the studio side to throw something so grand in scale and technically impressive to a debut filmmaker, and b). the assumption that neither POMPEII or COLOSSUS seems to foreshadow his westerns to come. After doing a little research, I learned this wasn't the first or even second rodeo for the big spaghetti-eating boy. Leone had been a first and second unit director since the 1940's and had already worked on well over 50 muscle-casted epics, including Helen of Troy, Quo Vadis?, and Ben Hur. Checks out that he was given the ticket to take audiences back to ancient worlds, build massive sets, employ thousands of extras, all while honing his craft and skills for the projects that followed.

THE COLOSSUS OF RHODES has all the same opulence and political machinations as POMPEII, but isn't very compelling. POMPEII isn’t very compelling either, but at least it’s got rubbermaid crocodile fights, lion jousting, and makeshift volcano pyrotechnics to ease how largely tedious the politicking is. This historical drama, by comparison, is just a drag. It's a film made for Leone completionists and that's about it, as I'm guessing no one would really seek it out unless his name was attached to it. Maybe it's me, but sword and sandal epics often feel overly long, dialogue-heavy, more complicated than they need to be, and simply dry to the bone. Not my jam...unless...

It's been over a day since I watched COLOSSUS and I honestly can't remember much about it besides a fun earthquake sequence at the end. Impressive set pieces and extravagant costume design, no doubt, but nothing terribly memorable or worthy of revisiting. Here's to hoping this is just a glorified misfire that gave Leone the freedom to pursue the masterpieces of the future.