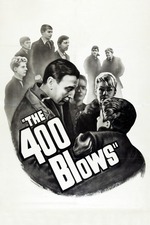 The final freeze-frame says it all.

Antoine has arrived on a vast and lonely coastal shore, liberated from the clutches of family and authoritarianism, with nothing to restrict him but the infinite possibility of the ocean. Days of crime, reform and hooky-playing are miles behind him. Detention centers are a thing of the past. Police can’t arrest him. Teachers can’t chide him. Parents and absent role models will no longer hurt him. And in this moment of idealization he feels alive, wild and perfectly exhilarated. A tabula rasa waiting to start anew. Then something happens.

Something shifts. Stranded between land and water, past trouble and future uncertainty, Antoine’s great escape slowly morphs into something else. It is the first time, in fact, he’s seen the ocean, and the feeling, rather than ooze joy, stirs creeping dread. He’s escaped, but now what? The moment holds our attention while appearing to do absolutely nothing, but if you listen carefully you can hear the existential chorus in the wind: freedom is a vast, untamed ocean, scary and limitlessness in potential. It is the first time Antoine has considered the dizziness of his freedom, the many possible choices he can make, and the effect of this uncertainty freezes him with paralyzing doubt. In Sartre’s language, he is “condemned to be free,” thus making THE 400 BLOWS one of the greatest parables about adulting ever made.