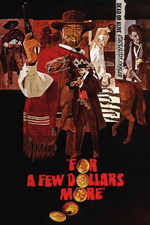 Bigger, nastier and more expansive than its predecessor, FOR A FEW DOLLARS MORE stretches the canvas of the West by squeezing not one, but two ace gunslingers into a savage world that feels built for only one of them to really rule. True to the mythology of the West, law and order is dangerously unstable, fugitives run amok, bandits senselessly kill, and murder has become a prized professional business to help restore justice in the streets. "Wanted Posters" offer premium rewards to anyone brave enough to take down the real criminals, setting up a market competition between the two best bounty hunters in the region for the ultimate, machismo standoff.

The Eastwood-Van Cleef dynamic is a compelling matchup of wits and strengths. In what has to be the funniest pissing contest ever put to film, the two men size each other up with cool, cocksure eyes and long drawn out stares, gracefully shooting off each other's hats as indisputable proof for how big their dicks are. So vibrant is the big dick energy between them, in fact, they're forced to acknowledge each other's strengths, see beyond the pettiness of their own rivalry, and join forces to wipe out the bigger, more evil baddies of the west : a gang of disgraceful bandits who kill babies and women. Together, The Man with No Name and The Man in Black form an uneasy alliance that pulls them into an all-star rebel tag-team, where cash, betrayal and vengeance await them in the hot and sandy El Paso desert.

FOR A FEW DOLLARS MORE certainly could've been a few minutes less, perhaps even by a full hour. The pacing is tedious and the perspective is muddled, losing its momentum in the middle. It's a bigger film than its predecessor, more complex, more kills, but that doesn't necessarily make it more desirable. Leone's ambitious vision has superior production value to A FISTFUL OF DOLLARS, but it doesn't always pay off as it should. The plotting is janky and all over the place, at times unthreading the needle of the story with moments that bore rather than entice. It works until it doesn't work, and so on and so forth throughout. I prefer the stylistic pulp and the lean, tightly paced rhythm of A FISTFUL OF DOLLARS, which is odd for me to admit because FOR A FEW DOLLARS MORE is clearly shooting for things I'm generally more interested in, like characters who are humanized, emotions that are varied and complex, and morality that's grey. It's just missing that swifter, more concise execution that fueled my love of FISTFUL.

The best character once again is Morricone's haunting score, which adds a surreality to the violence with a kind of twanging menace. The Van Cleef and Kinski standoffs in the dirty saloons are also unforgettably badass (not to mention hilarious). Kinski's smarmy face and twitching mouth is perfectly cast, while Van Cleef striking a match on the hunchback's suspenders to light a pipe recalls the theatrical mind games between Colonel Hans and the farmer in INGLORIOUS BASTERDS. While Van Cleef brings a more humanizing reverse to Eastwood's cold amoralism of the first film, the sheen of cool that "Joe" radiated in FISTFUL isn't as direct. We got double the badasses in this film, double the trouble, which is fun but also kinda dilutes the epic mood of the Man with No Name. Eastwood doesn't feel as mythically cool or mysterious when he plays second fiddle to other characters, especially when he's outclassed by the older, possibly wiser Man in Black. Don't get me wrong. I dig the Eastwood-Van Cleef pairing, but I prefer the cryptic lone drifter who sweeps into town unannounced and wreaks chaos. Maybe I'm just admitting I prefer the nihilism of FISTFUL over the vengeful humanism of its successor, though each have their appeal.

Lots to admire in this film overall, some truly singular moments, even if the whole feels less than a few of its individual parts.