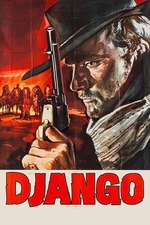 Badass to the bone. A spattered jolt of mud, bullets and blood hewn across a barren wasteland of striking visuals, led by an anti-hero coursing with enough lethal intensity to take out more soldiers than the Civil War itself. Don’t mess with 🎶 Djangooooo 🎶 ¿comprende mi amigos? Every time his theme song came on I screamed with delight. Reaches the same warrior levels as YOJIMBO and A FISTFUL OF DOLLARS, clearly indebted to both, only this bruising spool of crimson spaghetti is way pulpier, way funnier, and far more amped-up on its own excess and exploitation.

Tame by Tarantino’s standards today, not as stylistically graceful as Leone or Kurosawa, but Corbucci’s vision of the Old West is certainly more metal, blood-soaked, and gloriously absurd. So much here for the genre nerd to devour. There’s the lone gunslinger painfully dragging a mysterious coffin across the desert. What’s inside? Who is he? The hero? The villain? The personification of batshit chaos? Answer: All of the above. Django comes equipped with his own shades of grey and black, reinforcing the genre’s amoral center. There’s the empty ghost town spookily waiting for carnage to erupt, waiting for the hell of vengeance to take hold. The costumes, locations and set-pieces are all directed with such fiery energy.

Fanatical ex-Confederates armed with red-masked crypto-Klansmen are pitted against Mexican revolutionaries who don their own brand of barbarism. Django, like Sanjuro and Joe before him, remains at the center of this warring rivalry like a specter waiting to attack, meanwhile Old West tribal shit is on full display. One guy’s hands get ceremoniously mangled by horse hoofs, another guy’s ear gets hacked off and fed to him like supper, inspiring Mr. Blonde decades later.

The film just feels baroque af. Even the colors are transgressive for a western, eschewing the standard browns and golds for deep reds, purples and washed-out blues and greens.

The bleak and desolate landscape of Corbucci’s America is the perfect setting for the wicked to slay the wicked. RESERVOIR DOGS and THE HATEFUL EIGHT will pay tribute in the future. The film also has that rough-and-tumble aura of a drifting tumble weed, a dusty realm where a mysterious stranger suddenly appears, kicks ass, then disappears in the winds after saving the marginalized. I loved the sheer brutality of it all. The conventions, the subversions, the cock-a-doodle vision. Corbucci presents mayhem with grungy style, tailored for a very specific kind of genre lover, and brought to life by Django’s crippling secret weapon and hilarious theme song. It may not be Leone level opera but it sure is old-timey genre fun. The most splatterfest spaghetti western I’ve seen to date.