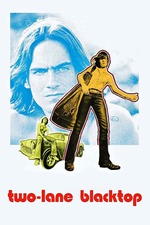 **Watch out, some light spoilers ahead!**

Two-Lane Blacktop is a rather odd film.
It has charactes, but they have no name.
Two known musicians act in it, but they don't sing.
They fall in love with a girl, but no one takes it.
There's a cross-country race, but no one wins.
The film finish in an abrupt way, but it never really ends.

Two-Lane Blacktop is another one of those American contraculture/new wave films that could only have been made in the 70's, when for a short period of time, young directors had more freedom and control over their movies (although Monte Hellman did have a lot of troubles with Universal to release this one), but this isn't exactly another Easy Rider, there's no Born to be Wild and Dennis Hopper getting high here. Two-Lane Blacktop takes a different direction, a more naturalistic, realistic and minimalistic one.
Like a Bresson film, most of the "actors" in Two-Lane aren't professional actors, they are people playing themselves, the policemen, bartenders, shoptenders that you see in the film, are real people with those real jobs; even the soldiers that GTO picks up near the end are real soldiers. It's all about trying to reflect life in the more realistic way possible, almost all the (little) dialogue is improvised (Hellman decided to not give the actors the script until the day of shooting, and I doubt that they even read it), making it sound more naturalistic.
A lot of people praise GTO/Warren Oates' performance, and they are right, he is great in it, but is not about making a good performance, is about a making a real, more intimate, one.
Unlike other similar films from the time, the "freedom theme" in Two-Lane seems more ambiguous, The Driver and The Mechanic, although free spirits, are slaves of their own obsession with cars, which makes their social interactions awkward and difficult. And what about GTO? he comes out as a man with a midlife crisis, that seems to be on the race just to brag about it. And finally The Girl, which is presented as a carefree character, ultimately "takes the liberty" of driving away in another guy's motorbike, leaving James Taylor with a stupid look in his face.

I don't think I can analyze this furthermore, like Last Yeart at Marienbad or other Hellman films, this is a movie that you need to feel to take something out of it.

Oh, and check out Hellman's Ride in the Whirlwind if you liked this one.