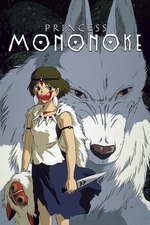 Every time I watch Princess Mononoke, I become more impressed by it. By now, it must be ten times that I've seen the film and still, it continues to grow more beautiful and more complex.

From the moment the table-setting prelude ends, Ashitaka's theme commences and the title card appears, I am immediately aware that I am in the hands of a master. Very little imagery has been shown by this point, and yet...the epic sweep of a grand and mystical adventure is already felt and a brilliant telling of the tale is all but assured.

That tale, of course, is one that concerns gods and demons, animals and humans. Giant beasts roam the land and a war is being waged by the inhabitants of a small, fortified, iron manufacturing town on the wild keepers of a vast forest. Meanwhile, an unlucky young prince, far away from the ongoing violence, contracts a potentially life-ending curse when his village is attacked by a rageful boar demon and sets out to meet his destiny and discover the source of the spirit's hate. He is eventually led to the brewing conflict and makes it his mission to put a stop to the fighting and bring harmony back to the forest of the deer god.

Miyazaki's detailed storytelling is impeccable. His characters are nuanced and realistic, never led down the path of stereotypical portrayal. Aside from the peacefully mediating protagonist, there are no purely good or bad characters. Lady Eboshi, the leader of Irontown, takes pity on the downtrodden and treats her people well, but she also displays a ruthless thirst for conquest. Similarly complicated is the titular Princess Mononoke, who turns her back on humanity and commits entirely to the role of vengeful warrior, but also possesses sympathy, and through her delicately written relationship with Prince Ashitaka, begins to open up and reveals a hint of insecurity. Miyazaki subtly defines his characters in every scene, whether the tone is thrilling or contemplative.

What gets me every time is the intensely "cinematic" nature of the film. From the textured plot to the transitions and "framing" choices, Princess Mononoke doesn't feel like most animated films and instead takes on an experiential quality. The story world's various elements are perfectly spaced out and events are precisely paced. Its storytelling is fluid, its imagery is unshakable, and the feelings of the film run very deep, thanks to the impassioned and righteous emotions of the director.

A more stirring and intricate evocation of environmental themes could not be found. In just over two hours, Miyazaki lays out the beginnings of nature's clash with industrialization. Humanity persists in its drive toward expansion and technological advancement, neglecting and in most cases, actively destroying the natural land. Nature pushes back in its own ways, but without people to advocate for it, it is on the losing end. "Why can't we live together?" asks Ashitaka. The question is simple, but relevant. This is our home, after all. And here is a point that is made beautifully clear by the film's end.

For nature we have both dependence and contempt. It is viewed as an obstacle, but it is intrinsic to who we are and how we function. In Princess Mononoke, the hunting of gods - enormous entities of great age, wisdom and influence - is equated with the systematic suppression of our own ancient surroundings. The film's ending is gracefully optimistic, if not entirely realistic...A selfish and ugly deed produces terrible results as the world is thrown into nightmarish turmoil. Death is everywhere and nothing but hauntingly lamentory cries and the sound of trees falling can be heard. A hopeless situation is suddenly reversed once a mutual understanding is reached and then...the nightmare vanishes. From this dream of foretold consequence, we awake as children, the world now seen with eyes unclouded. With the return of the foliage comes the newfound resolve to live according to that once questioned harmonious ideal.

The film's final moments, accompanied by Joe Hisaishi's musical score, are perfectly measured, just like the rest of the film. Each time those first piano keys are hit, I am nearly brought to tears by the sincerity of Miyazaki's vision. The word "masterpiece" can be applied to a number of the man's works and it would not be out of place here. Princess Mononoke is a singular achievement- a film of immense imagination and one with the capacity to both move and inspire its audience.

Its appeal refuses to fade and I will cherish it always.