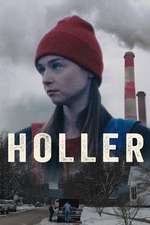 B. McCall’s review published on Letterboxd:

From the first scene of Holler to the last image, there's no question or doubt about what movie you're seeing; no dualism or magical realism you go in and out of. What we see through the bleak blue screen scenery of DP Dustin Lane's 16 mm camera work is the bleak dreary life of small industrial towns where 'the factory/plant/mine' is what keeps the town existing. And when they close down, so do the towns and those who populate it.
The emotional angst, depression, and frustration are so palpable, which is so impressive in that director Nicole Riegel, a veteran of just such a town in southern Ohio, and the strong cast, were able to bring such authenticity and development of mood in under 90 minutes of filmmaking. Credit here, again, to Riegel for her tight script and the editing skills of Kate Hickey. These are some talented women working in the movie industry who hopefully will keep producing films of such quality for many years to come.
The performances of Halpert, Adlon, Amelio and Baker are all strong. These are people we believe in, maybe people we know. The veterans Baker and Adlon bring a lot of years worth of quality work as many different people into the characters of Linda and Rhonda. We pull for both of them. But this is young Jessica Barden's movie, start to finish. From the opening scene of her running desperately with snagged bags of aluminum, to the end, this is Ruth's story most of all.
A great many movies/directors try to bring these kinds of story lines to life; the struggles of blue-collar workers in a world where technology and corporatism use them then lose them. There's the kids divided between leaving for the promise of more or staying home in the only life they've ever known with the family they love. But so often, they show some empathy for the weight of such struggle, but not the weight itself. Riegel does not fail to bring it all to the show. 3.9 stars

B. is using Letterboxd to share film reviews and lists with friends. Join here.