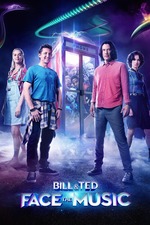 Well this was charming and wholesome and lovely through and through. Watching all 3 Bill & Ted movies in the span of 24 hours, the series felt surprisingly coherent - while masterpieces like Blade Runner 2049 and Creed might be ridiculous to compare here, in many ways this movie feels like it has the same level of relevance and well-deserved conclusiveness as those. I don’t know what it is, but this installment doesn’t have that “they came up with a lazy reason to make another movie 30 years later” vibe that so many soft reboots like Jurassic World seem to have. The notion of seeing Bill & Ted in their middle-aged life, still waiting to live up to their potential, actually feels relevant and compelling and funny to the overall story of the series.

If there are any elements I’d nitpick, mostly it would be the updated sci-fi aesthetic (why not keep the retrofuture vibe?!) and the fact that they shot on digital, which just looks god-awful at times and very jarring when placed right up against the first two. Why are the lighting and blocking in all modern studio comedies so very, very flat? The musical score, too, felt like it could’ve leaned into more dated synth tones, but mostly went for the generic 2020 blockbuster sound. And then there’s the fact that they had to up the stakes and turn the film’s climax into a universe-ending apocalyptic event, which obviously works best in the final film, but still felt somewhat clashing with the charming casualness of the previous 2 movies. Oh, and why recast the medieval princesses with younger and more well-known women when the actresses from Bogus Journey are still very much alive? Otherwise, it was great to see so many familiar faces return.

Anyway, sorry, I probably went overboard with nitpicks there. This is still a much-needed antidote to 2020 and the sense of wholesome, wacky, ridiculous antics was downright refreshing in a world of self-serious blockbusters. Like, it feels so good to see a movie in 2020 where Death is a member in a band and Mozart plays techno and there are ridiculous alien robots named Dennis. The clearly-emphasized line that “things won’t make sense until the end” obviously rings true; in the 3rd act, everything culminates in such a satisfying way and it actually brought tears to my eyes. Even the notion of seeing all people throughout history singing in harmony together; we’ve all been having some very necessary conversations about the sins and injustices of historical figures recently, but it still felt good to see humans throughout every era come together and make hope. Yes, the message of unity is a simple one, but maybe simplicity is What We Need Right Now.

Be excellent to each other.