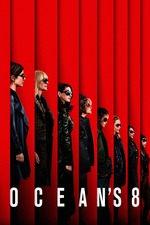 I have so many thoughts and feelings on this and I have so much to say and I'll probably ramble and lose track of myself as this review goes on so I just want to say the most important thing to start right off. I had so much freakin fun watching this. For me personally, this was such a feel good film and I smiled and laughed the whole way through. That's exactly what I was expecting from this, it's exactly what I wanted and it’s exactly what I got. I loved it.

Granted, I feel like I need to acknowledge that by no means is this a perfect film. I feel like it kind of just got messier and messier as it went on and I didn't really know where they were going with it towards the end. But I had fun and like I said that's all I wanted from this. I had to literally restrain myself from giving this 4 stars though.

There was something so special about watching this in a screening that was full of women. Strange thing to notice, I know but I did (I went to the bathroom during the adverts beforehand and had a good look round at everyone else who was in there on the way back in). Just seeing women on screen in a way that I feel I've never seen them before was so satisfying. They were slick and charming and able to get away with it, in the same way men always do. They pulled it off. They had fun with each other. They laughed and joked. They ate food and drank beer together. Small things like that what I noticed really made it special and satisfying for me. The whole ensemble gave off a really good vibe and I think the fact that they all get along so well off screen shone through on to the screen and it worked so damn well.

Anne Hathaway has had a special place in my heart since the age of like 10 so it's so good to see her being so incredibly brilliant again. But I loved all the cast, every single one of them got their own scene stealing moment. And whilst I'll admit I held my breath when James Corden wormed his way onto screen I'm happy to report that he is bearable in this when usually he isn't bearable at all, and I feel like, as a Brit, I absolutely have the authority to say that.

Now, this next thing may be a bit weird and probably sounds kinda cringe but idk if any other ladies can agree with me in the comments on this but seeing this put me in a genuinely good mood, I walked out of the cinema feeling happy and confident, like I could singlehandedly pull of my own heist and then go for world domination afterwards. I feel like the Nicole Kidman 'wow, the power of women' meme is extremely appropriate here just because its true. It's so unbelievably true.

Now I want more films like this, but based on original ideas and original screenplays because whilst I loved this and I love ghostbusters I want more than rehashing originally male led films.

If you already haven't, you gotta rush out and go see this. You will not regret it.