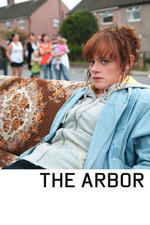 There are three kinds of documentaries that tend to most excite me. There are ones defined by an unforeseen twist that falls into the filmmakers’ laps (My Kid Could Paint That), and ones that stay present-tense and experiential without any outside commentary (Leviathan, The Last Race). The third is the audaciously conceptual kind, of which The Arbor is one of the most effective I’ve seen. The more convoluted this gets, the better— sometimes we’re watching actors seamlessly lip-synching to the subjects’ real voices; sometimes it’s real footage of the late playwright, always jarring in this context; sometimes said actors are watching said real footage, or standing in the background while scenes from Dunbar’s play are performed on the streets she wrote about. It gets even more complicated, but the film’s power comes from how the many layers of artificiality interact with each other. It’s appropriate for a writer whose celebrated work seemed to transpose her real experiences straight to the stage.

Andrea Dunbar, however, isn’t exactly the subject of The Arbor. That would be her even more troubled daughter Lorraine, whose story eerily reflects the kind of cyclical self-destruction that her mother portrayed so colorfully. The best parts of the film put her in direct confrontation with her own and others’ memories: Actor Lorraine reading from her section of the “verbatim play” (another layer!) A State Affair, followed by reactions mouthed by her Actor Family Members all sitting together, or Lorraine and her sister speaking from their childhood room while the bed burns behind them. So if I have any criticism, it’s how these moments become slightly fewer and further between in the second half. Andrea’s death “occurs” about halfway through the film, though she remains a presence through more scenes from her play as well as her children’s continual grappling with her legacy. It’s mostly the last 20 minutes or so that simply dramatize her daughter’s increasingly grim biography, without pushing the project’s meta inspiration any further.

Still, the very presence of the actors— and the fact that we never even see the real people they represent— maintains the multi-dimensional quality that makes this so compelling. There’s something about our relationship with these almost-real avatars that both distances and immerses us as viewers; it’s a way of organizing and exploring lives that exist through snippets of memories, crafted works of fiction, and what actual letters and videos remain. It’s not that far from how we mentally process our own lives, the past informing the present and sometimes vice-versa, with bits of actual record acting as mere signposts. The Arbor creates a space where all these impressions co-exist at once, which ends up feeling more truthful than a more conventionally constructed narrative. It may not be a space you want to visit often (this gets very bleak), but there's nothing quite like it while you're there.