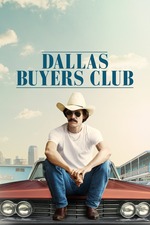 “Sometimes I just feel like I'm fighting for a life I just ain't got time to live.”

Ok, so, some notes before I properly begin this review. I’ve seen this film before, a couple of times before I believe, but after rewatching it again today, after leaving it for some time, I personally don’t think it’s as good as I once believed. Now, please don’t get me wrong here, don’t misunderstand what I’m saying, I think that it’s a really, really good film but it’s just not as good as I remember it being when I saw it for the first time. But this is still a very good film nonetheless, even if it’s not completely brilliant.

The one thing in this film that was actually better than I remember it being is Matthew McConaughey‘s performance. Don’t get me wrong, I thought he was excellent when I first watched his performance in this film but this time around, it clicked a lot more, he is on another planet of extraordinary, oh my lord! He’s phenomenal in this film. Everyone seems to fixate on his weight loss for the film and, sure, that is impressive and it added an extra element of realism to his performance but too many people seem to ignore his actual performance, which is truly out of this world. He deserved his Oscar and then some!

Jared Leto delivered a performance which is absolutely excellent too. Leto is a very toxic person, that’s common knowledge, but there’s no point in ignoring the facts, he’s an extraordinary actor and this film proves that. That scene where his character, Rayon, coughs up blood and tells his/her boyfriend, “I don’t want to die,” wow, that scene is a gut punch and a half, good lord. Just like with McConaughey, Jared Leto 100% deserved his Oscar for this film. I’d also like to give a nod to Jennifer Garner too who, although she has a relatively smaller role in the film, delivered a truly great performance, I wish that she wasn’t as ignored as she was around awards season during that year.

I can’t really speak on how accurate or inaccurate this film is as I really don’t know enough, if really anything major, about the true story of Ron Woodroof. But, I do think that this film has some pretty solid, although imperfect, writing. I think that there’s quite a few moments throughout this film which are expected for a film like this, a fair amount of the typical tropes are present, which is both a blessing and a curse because, although these tropes can still be effective, they make the film feel less original and fresh, like it’s been seen before. Overall, the writing, I believe, is solid but not perfect or even really that amazing, it works for the most part though, it does the job.

This is a really good movie but honestly, I remember it being a little bit better. If Matthew McConaughey’s performance wasn’t as incredible as it is, the film wouldn’t be nearly as good, his performance, in my view, singlehandedly carried most of this film. The rest of the cast, especially Jared Leto, did a great job too. I think that the writing could’ve been a fair bit better but I guess it also could’ve been a lot worse. Overall, a really good movie, just not as good as I remember.