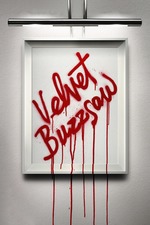 Don’t watch Velvet Buzzsaw if you expect a thought-provoking horror-comedy (if that’s possible). If it pretended to take itself seriously, it felt more like a half-baked or unwilling parody of itself. If it wanted to frighten, it definitely failed beyond a few laugh-provoking jolts. As a former art student, I was tickled by the “message” and enjoyed the cynical portrayal of the high art scene, but it ultimately rang hollow. It had a flair of M. Night Shyamalan’s comics-style horror-comedy, mixed with the philosophical musings of The Matrix sequels, and Woody Allen’s social critique. It’s startling how so many great actors could be united to create such lackluster film. As a whole, it was disjointed, with a slow setup and a series of mildly amusing foretold tragedies. Worth the watch? Sure, it's an entertaining joyride, that takes a while to pick up but delivers a few jolts, laughs, and thoughts, but keep expectations casual. Spoiler alert: favorite bit was John Malkovich making spirals.