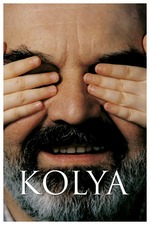 A charming and simply irresistible movie in the traditional of other great classics such as Cinema Paradiso and Life is Beautiful. Set at the end of the Cold War, Kolya tells the story of a middle-aged Czech bachelor who's forced to take care of a little boy after his mother, who the bachelor agreed to marry for a hefty pay, decided to leave everything behind and go to Germany. This most unlikely of fathers, who spends his days performing the cello at funerals and sleeping around with a nice variety of women, is then forced to cope with a child who speaks no Czech. Not surprisingly, soon the child is drawing nothing but coffins and innocently playing with lingerie lying around in the apartment. Perhaps most importantly, the movie is remarkably honest, while at the same time shining with magical moments that continue to captivate us and melt our hearts long after the movie ends.