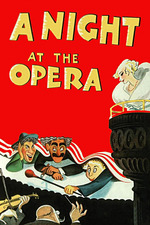 This is by far their best film and so completely different in style from their others that I have seen. It is still very much so a Marx Bro.'s film and it contains their trademark gags and routines. Groucho is as lippy as ever and delivers his infamous one liners right off the punch. Chico and Harpo continue their duet mixture of slap stick and anarchy on the social order. And it cannot be a Marx Brothers film with Harpo playing the harp and Chico at the piano, only here the musical sequence is performed the best I have seen from them and the most visually appeasing in the way they chose their shots for that scene.

In "Night At The Opera" as opposed to the other Marx films I have seen there is not a constant barrage of jokes and gags but a cinematic environment of characters and a intriguing plot of artistic hierarchy and of course why not throw a love triangle in the mix as well. Here the notorious Marxist (as in the Groucho kind) jokes and gags flow evenly within the story and it makes such a satisfying film experience. I loved the Opera world I was shown and the different array of characters and to have the Marx brothers in this sort of world just echos chaos that is about to ensue and boy o boy do I want to see it happen. The ending segment at the Opera house in New York is one unforgettable spectacle in the comedy genre of filmmaking. This film took me by surprise and then some. Bravo! I rate it a 8/10 for now but this could easily get bumped up to a 9/10 in the future.

On a side note: I think Harpo is becoming my favorite of the three. I am just putting that out there. Something about his demeanor and of course being silent reminds me of Chaplin.